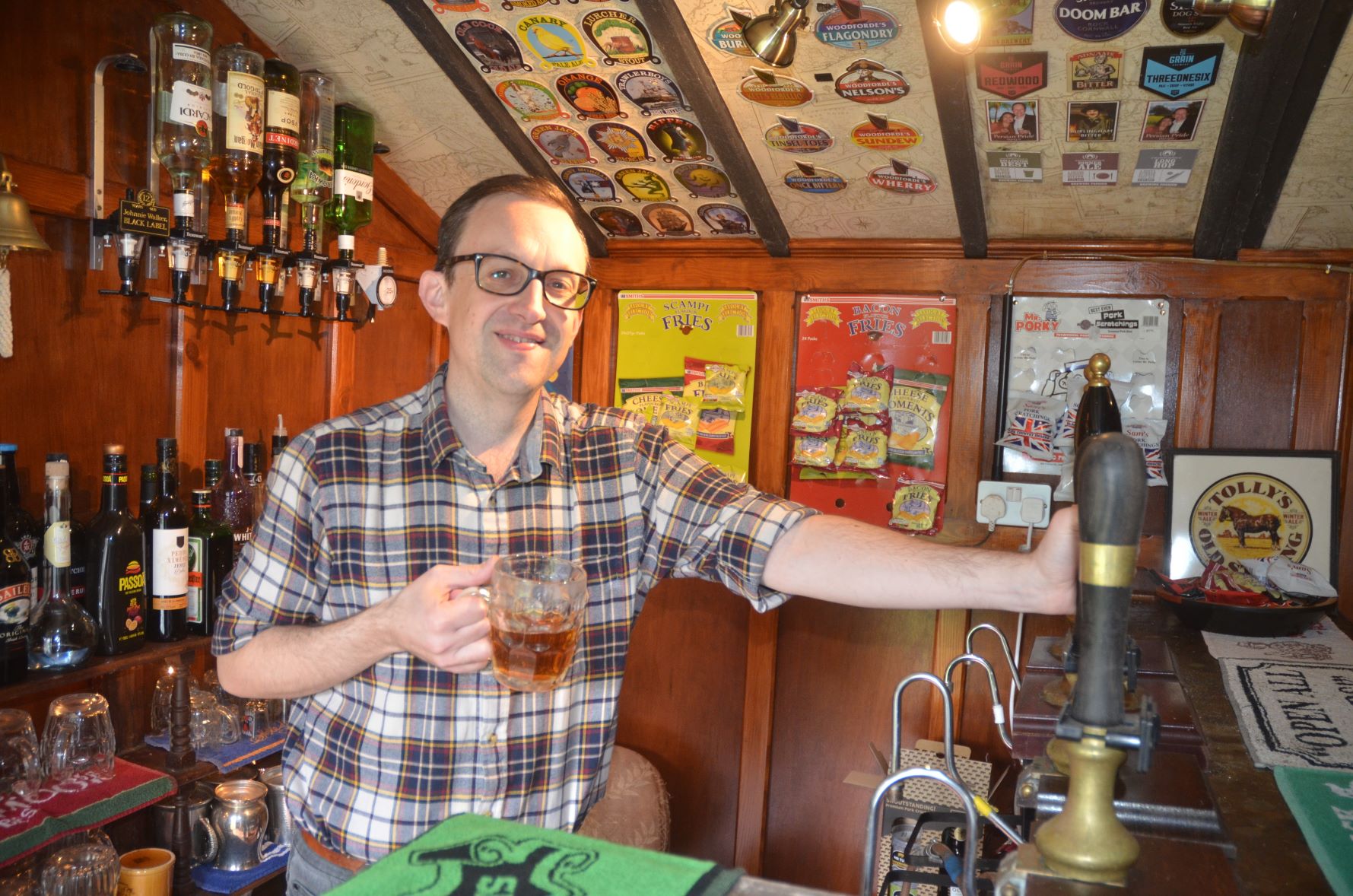 An ardent fan of the TV comedy series, and with the same first name as the character played by Rowan Atkinson, has built his own fully furnished pub called…The Blackadder.

Edmund Ramsdale, 40, a paralegal with Leathes Prior in Norwich, built the pub in the back garden of the house where he lives, the Old Post Office in North Burlingham, near Acle.

Mr Ramsdale started out with just a garden shed but over the past decade has expanded it – creating a fully stocked bar complete with four hand pumps for locally brewed beer, a saloon bar and lounge.

Dedicating it to the TV series he loved – and named Edmund like the Lord Blackadder character – Mr Ramsdale has a large mural of the Rowan Atkinson character on the wall. He’s also got ‘Baldrick’s Bar’ named after the character played by Tony Robinson.

He’s also amassed lots of pub memorabilia too from a vast collection of beer mats to old signs. And like many traditional British pubs, a photo of the Queen also hangs in pride of place above the fireplace in the pub lounge.

In fact, nothing has been left out with Mr Ramsdale stocking most alcoholic drinks and even having a good range of pub snacks available from crisps to pork scratchings.

But sadly, time is being called on Mr Ramsdale’s beloved watering hole – with the property he lives in, The Old Post Office, now for sale for offers over £450,000 with Brown & Co.

David Hinton, senior associate, Brown & Co property agents, Norwich, said: “The Old Post Office is a unique property in its own right; dating to 1840 with five bedrooms and a delightful garden.

“However, what makes it extra special is the fact it comes with its own pub in the back garden. How many homes can boast that? The pub is all set up but a new owner could of course convert it for other use.”

The pub, built on a concrete base with a timber frame, was a real benefit during lockdown – open all hours for Mr Ramsdale’s family and with no closing time at 11pm.

He said: “The pub has been incredible during the pandemic when all pubs where closed. My family and I had many good nights without having to leave home.

“I’ve always been a fan of Blackadder, with the same name. I like pubs such as the Wig & Pen in Norwich so I just decided to create my own version. I put in pumps so I could enjoy locally brewed beer such as Woodforde’s in Woodbastwick and Green Jack in Lowestoft, Suffolk.

“I don’t want to leave the pub behind but will probably try and build another one at the next house.”