HOW CAN LIVESTOCK AND ARABLE FARMERS WORK IN CO-OPERATION FOR MUTUAL GAIN? 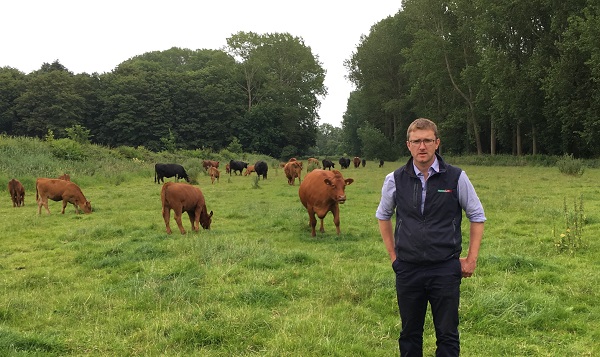 Our Agri-Business Consultant Andrew Spinks is an active partner in a North East Norfolk livestock business which has been outwintering cattle in the arable rotation for the past ten years. Here Andrew outlines methods used by livestock and arable farmers in order to create mutual gains.

The future for sheep and beef farmers could be to work in co-operation for mutual gain with their arable farming neighbours. Brown&Co were out in force at this years Cereals event, despite it being wet and muddy it was a good opportunity to walk around the show, see clients on an informal basis and see the technical developments that have occurred over the course of the last year.

One particularly interesting talk in the Conservation Agriculture Theatre was that given by Dr Liz Genever and James Daniel. Their premise being that arable farmers need to integrate sheep and beef businesses into their crop rotation. The duo predicted an increase in the margin earned by livestock farmers if they had the opportunity to cut overwintering costs by growing cover crops. In the process the arable farmer improves his soil through the addition of organic matter, the grazing contributes to the problem of clearing problem weeds and the service the arable farmer provides gains him with an income on an area of land which is otherwise not earning.

The NIAB soil pit saw the opportunity to look at the root structure of several cover crops and an opportunity to discuss with scientists the grazing project at Honingham Thorpe which they and Brown and Co are involved in. The grazing project which Brown&Co are part of is looking at quantifying the benefits of livestock and grass in an arable rotation.

Of course, from experience, it is known that success in grazing overwinter depends on the characters involved and the individual situation. Success for the arable farmer means that the animals move on and off the land punctually at the time agreed and the new enterprise does not have an impact on the efficient operation of the arable business. The livestock farmer needs a good crop which has been considered carefully rather than as a post-harvest afterthought.

Both parties must also consider carefully the choice of which crop to grow. The arable farmer looks for a species which sits within his rotation and does not contribute to building up of pests such as the Beet Cyst Nematode or Club Root. The livestock farmer needs fodder which provides the nutritional requirements of his animals, in a quantity suitable for a big flock or herd of animals which will last as long as possible, this means he is looking for big fields and high yields, thus minimising the amount of movement and the maintenance needed. There is considerable variation between the varieties of fodder available from the seed houses and it is important to know which one is going to meet your needs, select a different variety for late season and early season grazing.

Cultivations should retain soil structure. Livestock farmers should minimise winter movements on the land and consider how they graze their stock given weather patterns earlier and later in the season. The opportunity is real; farming big yielding winter grazing crops can put back a considerable amount of matter into the soil and sustain activity in the soil biosphere, whilst providing a return for both farmers.

Ruminant agriculture has much to offer the world; a contribution to soil management and conversion of grass and cover crops into human edible protein (which otherwise would go to waste) to feed a growing global population, whilst providing habitat for numerous species allied to the grasslands of this island. If performed professionally and efficiently, welcoming livestock onto an arable farm is an interesting, sustainable and rewarding route for arable businesses.