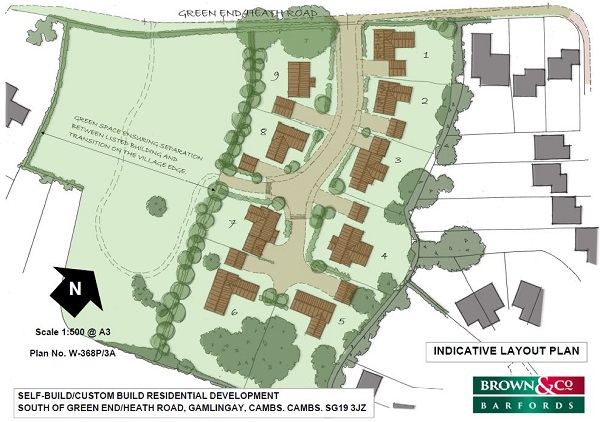 Brown&Co have secured planning permission on appeal for the development of up to 9 self-build/custom build houses on the edge of Gamlingay in South Cambridgeshire as a departure from the up-to-date Local Plan.

The application for outline planning permission was submitted by Brown&Co on behalf of the Landowners, Wyboston Lakes Limited, and was refused by the South Cambridgeshire District Council in February 2019 for reasons that the site is outside of the village development boundary designated in the Local Plan adopted in September 2018 and would be harmful to the rural character of the village. The Council argued the Local Plan was up-to-date and it was able to demonstrate a housing land supply of over 5 years.

The appeal was lodged in May 2019 arguing that, notwithstanding the Local Plan village boundary Policy, the council needs to deliver more than 400 self-build/custom build plots by October 2019 to meet the statutory duty under Section 2A of The Self Build and Custom Housebuilding Act 2015 (as amended) and this was a significant material consideration. Furthermore, the development would contribute to meeting the Government’s aim to significantly boost the supply of housing and would contribute to the Local Plan windfall housing provision. It was also argued the proposed plots would be in a sustainable location on the edge of a Minor Rural Centre and the site is well related and accessible to the village facilities. In relation to rural character impact, it was argued the proposed development could be accommodated without being intrusive or harmful.

In allowing the appeal, the Inspector accepted the points made by Brown&Co and gave significant weight to the need to meet the self-build/custom build statutory duty under Section 2A of The Self Build and Custom Housebuilding Act 2015 (as amended), which justified a departure from the development plan. In relation to the landscape harm objection, the Inspector accepted that the proposal would not be visually or spatially harmful to the appearance of the area nor to the wider landscape character.

Martin Page, Planning Consultant with Brown&Co commented ‘this decision helpfully reaffirms that the need to meet the self-build/custom build statutory duty under Section 2A of The Self Build and Custom Housebuilding Act 2015 (as amended) is a significant material consideration that can warrant a departure from an adopted and current development plan’.

The successful appeal follows Brown&Co obtaining outline planning permission for 8 Self- Build/custom build plots at Firs Farm, Caxton, where Brown&Co are now assisting with the preparation of the site through the discharge of conditions for demolition, archaeological investigation and site infrastructure in readiness for the marketing of the serviced Plots.